Happy Sunday! I’m hanging on to the last months of summer and squeezing every last drop out of the weekends that I can. 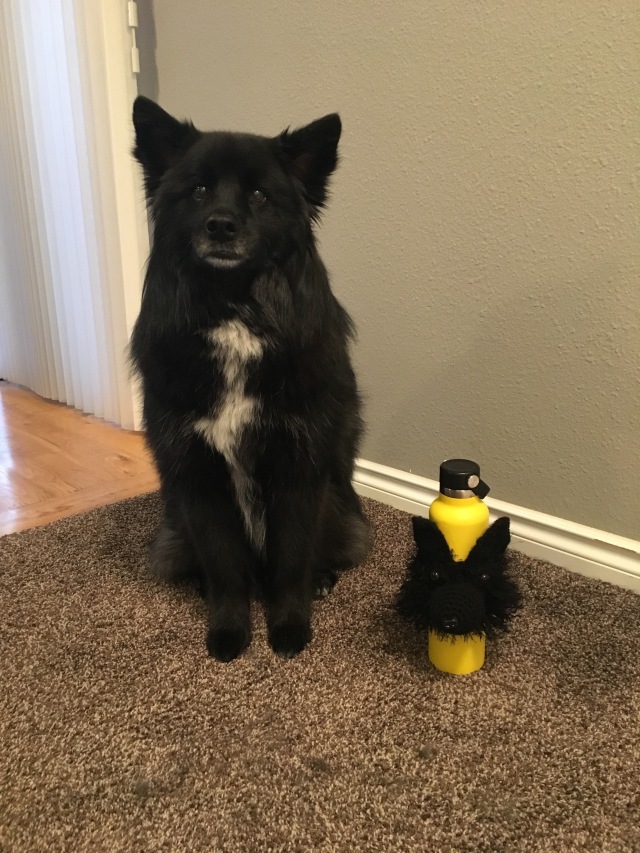 That’s what you think it is. A Teton mug cozy.

Made by my sister who is insanely crafty.

Teton is a little unsure of what to think, but I think he’ll warm up to it. 😉

Today’s post is about anxiety. If your dog doesn’t suffer from anxiety and could care less about things like being away from you, thunder, or fireworks, you may not find this post interesting. But, if you’re one of the many who deals with anxiety, fear, and nervousness in your dog(s), hi. Let’s be friends. Because it’s a very real and stressful thing.

Teton was never an anxious puppy. He did great when we left him alone and didn’t seem to even notice thunder or fireworks. It wasn’t until he turned two that we noticed a fear of fireworks (we call ’em boom sticks) and since then it’s gotten worse each year. Now, at the age of eight, not only is he afraid of fireworks, he’s afraid of thunder, lightning, and whistles (even a referee’s whistle). (He even panics in the opening credits of Disney movies when fireworks shoot out over Sleeping Beauty’s castle.) While a bit harder to confirm, Teton also exhibits some anxiety when separated from us.

You’re probably familiar with the ThunderShirt. We tried it for Teton a few years ago but it didn’t seem to help. Teton’s cousin, Henley Pretzel, has one that he wears regularly. Recognizing that things change over the years and sometimes the things that didn’t work before work now, I’ll probably order a new ThunderShirt for Teton at some point since his fear of thunder and fireworks has gotten so severe.

The point of me bringing up the ThunderShirt is this: a few months ago, the kind folks there sent me a box of goodies for Teton. 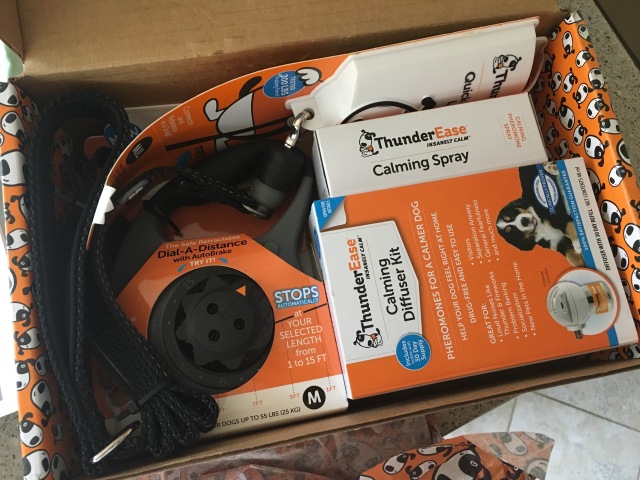 We received four products from their line, but today I want to introduce you to two of them – the ThunderEase for Dogs Diffuser Kit and the ThunderEase Dog Calming Spray. 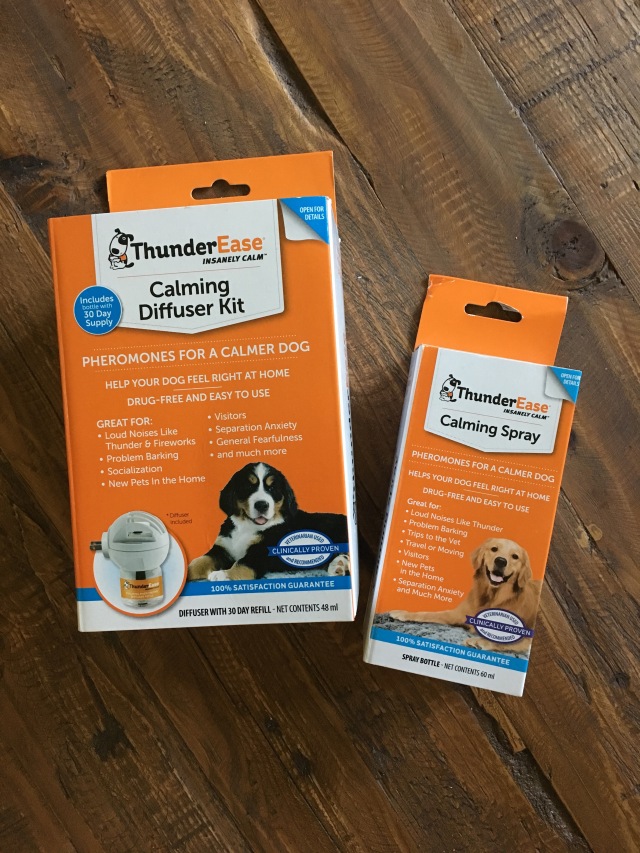 The ThunderEase for Dogs Diffuser Kit is a home diffuser that you simply plug into the wall in the room where your dog spends most of his or her time. The diffuser is designed to keep your dog calm and to aid in easing anxiety caused by thing like fireworks, separation anxiety, and fearfulness.

The diffuser replicates pheromones that a dog’s mother emitted when he or she was a puppy in order to provide a sense of security and comfort.

Each diffuser contains a 30-day supply and is easily replaced with a refill once depleted. 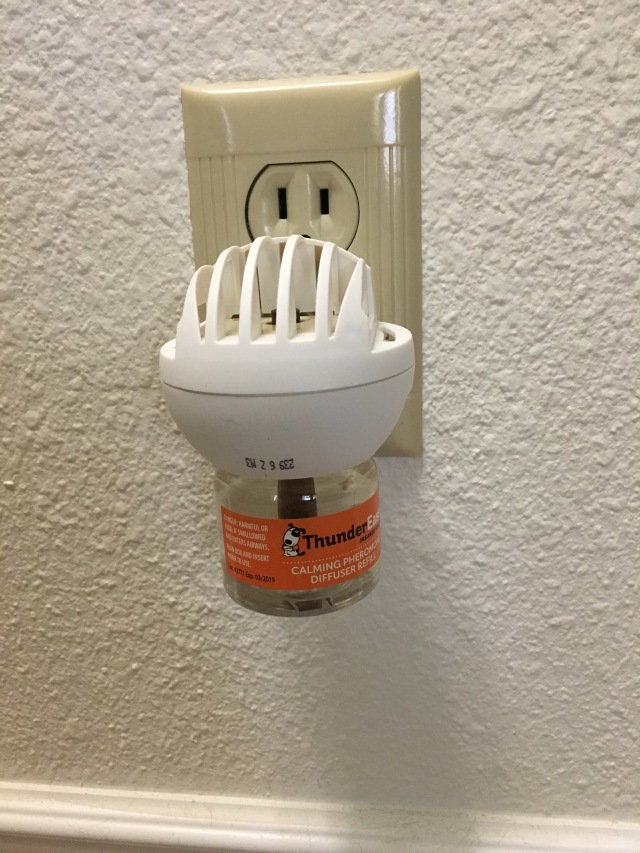 I mentioned earlier that we think Teton may have some separation anxiety. While hard to confirm, I believe this is the case because he scratches at the carpets and rugs excessively (sometimes pulling material up and causing slight damage) when we are away from the house. Since that’s not something we can always control, putting the ThunderEase Diffuser in the room he spends the most time in while we’re away was a no-brainer.

Has it helped? Again, this is something that’s hard to gauge completely, but we believe it has, since there is less evidence of scratching and digging at the rugs and carpet. At any rate, I’m not naive enough to think that there isn’t the potential for disruptive things to happen while we’re away from the house like thunder, neighborhood kids screaming while they play, other dogs barking outside, etc. Anything I can do to help Teton be less stressed if and when these things happen is something I’m all about! Plus, the ThunderEase Diffuser is so easy. Open the box, attach the refill bottle, plug it in, and you’re done!

To up the ante, I’ve been using the ThunderEase Calming Spray in conjunction with the diffuser.

ThunderEase’s Calming Spray is comprised of the same pheromones that are in the diffuser, but the great part about the spray is that it’s portable! You can spray it directly on anything your dog comes in contact with like a ThunderShirt, collar, blanket, dog bed, or even your car.

I love both of these products from ThunderShirt’s ThunderEase line because they’re all-natural, affordable, and easy to implement in Teton’s life. For many dogs, medication is the only thing that will work and/or the best thing for them, but I’d like to exhaust all of my other options before we get to that point for Teton.

If your dog struggles with anxiety or fear, check these two products out. And, if you have something else that works, I’d love to know about it! 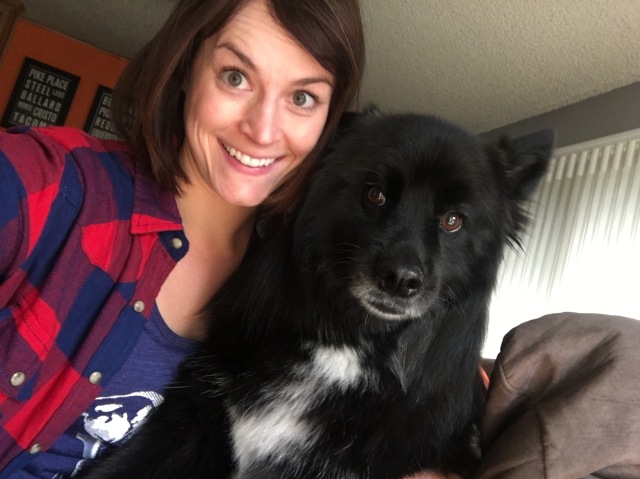 DISCLAIMER: HER DOG BLOG WAS SENT THIS PRODUCT IN EXCHANGE FOR OUR HONEST REVIEW AND NO COMPENSATION OTHER THAN THE PRODUCT WAS RECEIVED.